On April 17, 1907 the Point Pleasant and Bay Head Fire Company was incorporated. This was one year after the largest fire the town had seen destroyed all the buildings from the corner of Bay and Laurel Avenues to Arnold Avenue. The first Chief of the Company was George Osborn who was elected in 1908 followed by Chief Theodore Pearce. The first official purchase of the Fire Company was 500 feet of hose and a Hose Wagon to carry it. This apparatus was housed in a small wooden structure on the corner of Bay and Laurel Avenues. The Hose Wagon and other equipment were pulled to the fire scene by the delivery van and a horse belonging to Joseph Vetrini, a member who owned a grocery store on the present site of the Leader Building. Some time later, the first Fire Truck was hand made by John Pfiefer who constructed the body over the frame of an old Pierce-Arrow. The coverage area during these early days included the Herbertsville, Bay Head, and West Point Pleasant as well as points up to an hour away.

In 1918, a local Real Estate Broker by the name of Joseph Moran donated a Ford Model “T” Chemical Engine to the company. This apparatus had no pump but instead relied on a chemical reaction between baking soda and sulfuric acid to produce carbon dioxide gas with enough pressure to send the water through the hose and out the nozzle. The company changed its name at this point to the Moran Engine Company in his honor.

In the early 1920's, the small wooden firehouse was replaced by a larger building on the same location. It was a two-story structure, which could accommodate three pieces of apparatus. The building is still in existence as the Bay Avenue Professional Building.

The History of the Company During 1927, rules were set in place between the two fire companies concerning the election of
a Chief of the Department. The rules were as follows:
1. The position of Chief was to be held for a period of 3 years
2. The applicant must have been a resident for at least 1 year prior to the election.
3. The election was to be held in the Council chambers on the third Thursday of December from 7 to 9 P.M.
4. A new election could be called for at any time by a petition if signed by members of each Fire Company.
5. Chief was responsible for calling a joint meeting between the two companies twice a year.
6. Each company to elect a Deputy Chief. The First Deputy to be in charge in the Chiefs Absence.

1927 was also the year in which a member referred to as Mr. Yarrow was instructed to look into forming a Ladies Auxiliary for the company with his wife‖s help. Apparently, by late 1927, early 1928 this group came into being. Funds during the 1920‖s must have very scarce. For example in December of 1927, the purchase of hose had to be put off until the following year. To make up for this short fall a number of fundraisers were conducted. This included a 50/50 Grove Theater Motion Picture Benefit, which was held in May of 1929.

A Ward LaFrance Ladder Truck Arrived in 1939. This truck did not have an aerial ladder but instead relied on ground ladders, which had to be put in place, and manually raised. This truck
was extremely long and reportedly was very difficult to turn, as it did not have power steering. The passenger frequently had to help the driver turn the wheel when exiting the firehouse onto Bay Avenue.

Starting in 1941 the Fire Company started looking into replacing the Hale Pumper. A proposal was received from the Ward LaFrance Truck Company of Elmira, NY. This called for a four- door enclosed cab 1000 GPM Pumper. For whatever reason, perhaps due to wartime restrictions the truck was not built. It was not until 1948 that a Ward LaFrance Pumper was purchased which had a two door open cab.

During The Second World War, most of the senior members went off to war and therefore the task of firefighting fell to the Junior Firemen many of whom were still in high school. A Ford Truck with a booster tank and reel was designated as their truck and was useful for brush fires, which occurred frequently along the railroad right of way. Just one year later in 1949, a “John Bean” High Pressure Fog Truck was purchased. This truck had two hose reels with high-pressure guns that discharged 30 GPM at 600 psi. This truck was very efficient at putting out fires with a minimal amount of water. This truck was damaged by fire at a forest fire and this may have contributed to its demise. Shortly thereafter another “John Bean” High Pressure Fog Truck was purchased in 1959.

It was decided in the mid sixties that a new Firehouse would be built using the money earned from "bingo". The site selected was on Laurel Avenue behind the Leader building. The house on this location was burned down at a drill. Fire Companies from numerous towns were invited to this drill. Included was Wanamasa Fire Company from Ocean Township in Monmouth County who brought their new Snorkel aerial platform.

In 1968, being impressed with Wanamasa‖s Truck, a 75 foot Pitman Snorkel was purchased and delivered. It was the first of it‖s kind in Ocean County and it replaced the 1939 Ward LaFrance Ladder Truck. Soon after it arrived it was used at the Van Note Lumberyard fire. In addition, the Fire Company purchased a GMC Carryall for carrying personnel.

1972 saw the next apparatus arrival in the form of a Seagrave 1500 GPM Pumper. This engine replaced the 1948 Ward LaFrance Pumper and is still in service today.

In 1975, an addition was put on the firehouse in the form of an entertainment room.

In 1979, a Chevrolet Suburban was purchased to replace the 1968 GMC Carryall.

The Fire Company celebrated it‖s 75th Anniversary in 1982 with a party inviting all of it former members as well as Life Members.

1983 saw the arrival in the form of a Pierce/White 1000 GPM Pumper. This engine replaced the 1959 “John Bean” High Pressure Fog Truck.

The late 1980's saw several large fires including Jenkinson’s, the Ocean Bay Diner, a portion of the center of town, and Cicci’s Pizza.

A second hand 1977 Chevrolet / P & L Custom Body Ambulance was purchased about this time for use by the Fire Police.

By the late 1980's, the 1968 Snorkel Truck was showing it‖s age. However, the aerial boom was still in good condition and had relatively few hours on it. Therefore, in 1990 the aerial boom was remounted on a Pierce-Arrow chassis. You may recall that the Fire Company‖s first truck was also a Pierce-Arrow. The new chassis featured a four-door cab with seating for six, a 1500 GPM pump, 300 gallon tank, and a diesel generator. Ocean Fire Company had also received a new truck at this time and so a dual wetdown was held in Jenkinson‖s north lot in May of 1991. Over 200 trucks from all over New Jersey and other surrounding states attended this event. The parade circled the entire town.

In 1992, a Chevrolet van was purchased to replace the 1980 Chevrolet Suburban. The 1972 Seagrave received a face-lift in 1995, which included the newly adopted Black over Red paint scheme. Aerostrip, Inc. of Medford, New Jersey performed the work. In 1997, the Fire Company celebrated its 90th Anniversary by having a pig roast at the building. Those invited included all old members, as well as the officers from Ocean Fire Company as well as the First Aid Squad.

By 1998 the 1977 Chevrolet/P&L Custom Body Fire Police rig was showing its age and was sold. As a replacement the company purchased a second hand Ford/P&L Custom Body Ambulance which was repainted in the current black over red scheme.

In 1999, after at least three years of planning and countless meetings it was decided to go ahead with replacing the 1982 Pierce / White 1000 GPM Pamper. The new engine, a 2000 Dash 2000 1500 GPM Pumper was delivered on in late November of 2000. This state of the art apparatus features items such as a fully enclosed climate controlled eight-man cab, a head set intercom system, roll-up doors, a hydraulic ladder rack, digital displays for the driver and pump operator, and a hydraulic generator.

In 2003 ,after 36 years, the Borough Ordinance regarding line officers was amended and the position of Assistant Fire Chief was added. The first assistant chief elected was Mark Drew. In May of 2006, Memorial Day Weekend, Fire and Safety Services delivered our new Pierce Dash 100ft Aerial Platform Truck.

In 2005, after at least four years of planning, numerous meetings, and presentations the go ahead was given by the Mayor and Council to replace the 1990 Pierce Arrow Snorkel, which was becoming increasingly difficult to maintain.  The contract was awarded and the order placed for a Pierce 100’ Aerial Platform on Dash Chassis.  Due to the increase in length of the new vehicle over the Snorkel it was necessary modify the truck bays in order to accommodate it.  Prior to delivery Pierce Manufacturing was suitably impressed with their own work, as well as that of the Truck Committee, that it selected the apparatus for display at the Indiana Convention Center/RCA Dome in Indianapolis, Indiana for the 2006 Fire Department Instructor’s Conference (FDIC).  FDIC currently is the largest instructor/training fire event in the United States.

The new Aerial, a 2006 Pierce Dash 100’ Aerial Platform was delivered on in late Friday May 26, 2006.  This state of the art apparatus features items such as a 2000 gpm pump, 300 gallon tank, six-man cab, a head set intercom system, roll-up doors, 10kw hydraulic generator, digital displays for the driver, pump operator, and aerial operator, air bags, and a full set of Holmatro Extrication Tools.

The new apparatus saw its first use while providing mutual aid to Wall Township to help battle a 4 Alarm commercial building fire at Allied Building Supply on July 31, 2006.

In the summer of 2006 the 1990 Pierce Arrow Snorkel was sold to Sullivan Fire and Rescue of Sullivan, New Hampshire.  The aerial device has since been removed and the apparatus converted to a 3,000 Gallon Pumper/Tanker.

The commitment and preparedness of the Company’s members was exhibited during Superstorm Sandy in 2013.  During the storm, the all-volunteer fire company responded to over 220 emergency calls, and assisted in saving more than 60 people from quickly rising water.  In the days immediately following the storm, the firehouse was manned 24 hours a day for approximately two weeks, during which over 7,000 meals were served to area Firefighters, First Aid Crews, Police Officers, County Road Personnel, and local residents displaced by the storm.

Listen to us Live 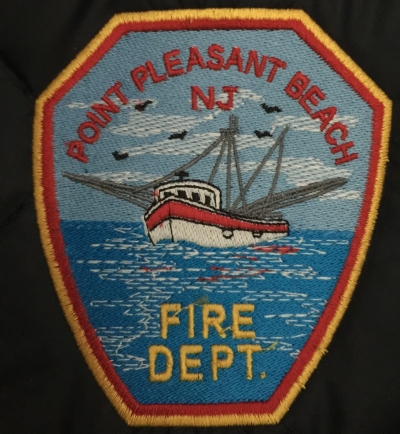 Copyright © 2006-2021. YourFirstDue Inc. All Rights Reserved. Designated trademarks and brands are the property of their respective owners. Content on this web site is supplied by Point Pleasant Beach Fire Company #2. YourFirstDue Inc. cannot be held responsible or liable for any content, text, pictures, or any other media found on this web site. Maintained by the members and staff of Point Pleasant Beach Fire Company #2.
Management Login
Powered by